This easy Panzanella salad recipe is not only delicious but also a great way to use up stale sourdough bread.  Packed with olives, capers, ripe tomatoes and basil, it's the perfect rustic Italian dish to serve on warm summer days. 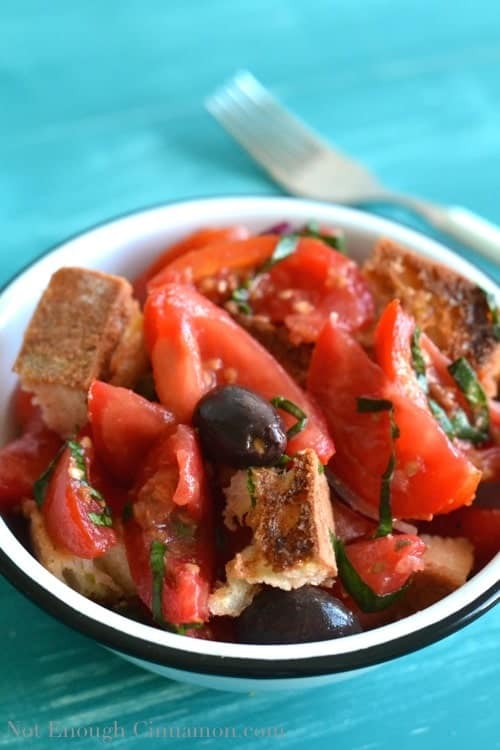 Before we talk about this GREAT Panzanella salad recipe, I wanted to address something I had asked you on my Facebook page : Namely when you'd wish to start seeing Fall recipes on NEC. Some of you said 'right now!' and some others said September. Oh, and one lucky lady said October because...she lives in Hawaii!

As far as I'm concerned, I think that we usually start talking about the next season or holiday way too soon (like starting all the Christmas things in November...) and it kind of ruins the season we're in.

So I opted for a middle ground and here's the plan: for the next coming days, I'll keep posting summer recipes and when September rings in, we'll slowly but surely transition to more stews, soups, baked dishes and Fall flavors, mmkay? But for now, summer recipes it is! 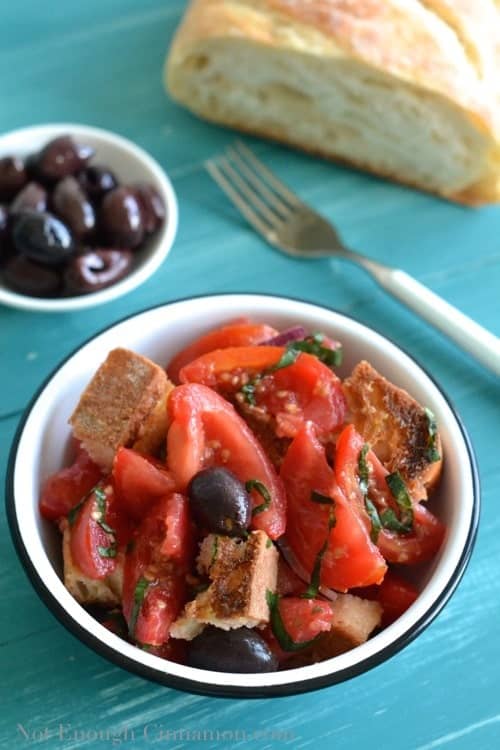 Panzanella salad is definitely a celebration of summer. Originally from central Italy – Tuscany to be precise – Panzanella is a bread salad made with tomatoes, onions, olives and basil.

Some also add anchovies, bell peppers or cucumbers. Traditional Italian Panzanella salad is very easy to put together and perfect for those sunny summer days.

It is made with stale sourdough bread, as a way to avoid wasting any food. Once soaked with olive oil and the juices from tomatoes, the bread became soft and edible again.

In this Panzanella salad recipe, I'm not using stale bread but thick toasted slices of sourdough rubbed with garlic and drizzled with olive oil. It reminds me of bruschette and I just love it.

Ideally, once your Panzanella salad is ready, let it rest for thirty minutes at room temperature to let the flavors develop but leave out the bread chunks. You'll add them only at the last moment to keep their crispy texture. Buon appetito!

If you tried this Panzanella Salad recipe, don’t forget to rate the recipe below and let me know how it went in the comments – I love hearing from you! You can also follow me on Instagram, Pinterest and Facebook for more deliciousness and behind-the-scenes!

This easy Panzanella salad recipe is not only delicious but also a great way to use up stale sourdough bread.  Packed with olives, capers, ripe tomatoes and basil, it's the perfect rustic Italian dish to serve on warm summer days.

* It important to use very good quality, fresh and ripe tomatoes because it's the main ingredient.