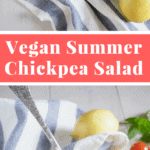 This simple chickpea salad is vegan, yet loaded with protein! Sliced cucumbers, cherries, and mint along with a simple lemon dressing make this the perfect healthy summer salad to serve on a hot day or at a bbq! 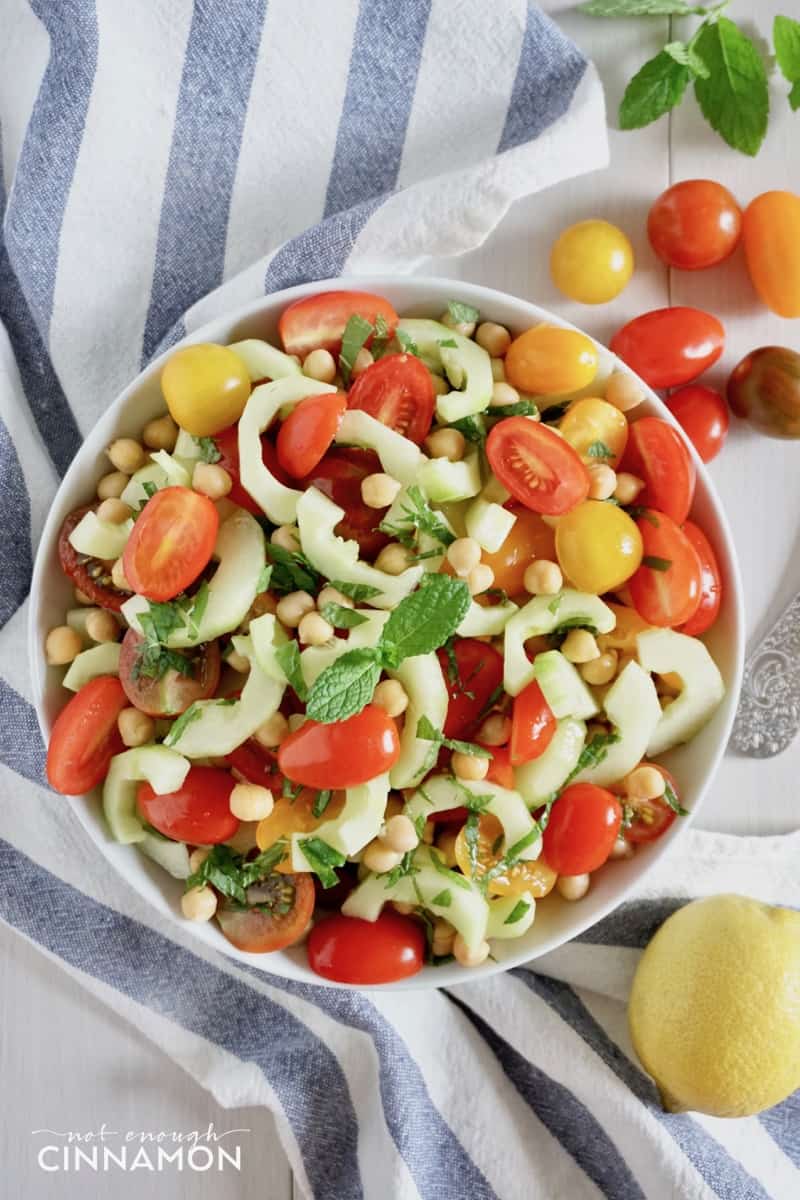 So let's see, how many of you thought that "Solal" was an ingredient's name? Come on, raise your hand! ???????? Turns out, Solal is actually my hubby's name and he's the official creator of this simple chickpea salad recipe.

We weren't sure it would be a good idea to name this chickpea salad after him. Solal isn't a super common name and we thought people would be like "what the h##?, what's a Solal".

But then we realized it would just be fun and you need to give credit where credit is due (and I liked the idea of him making an appearance on NEC!) 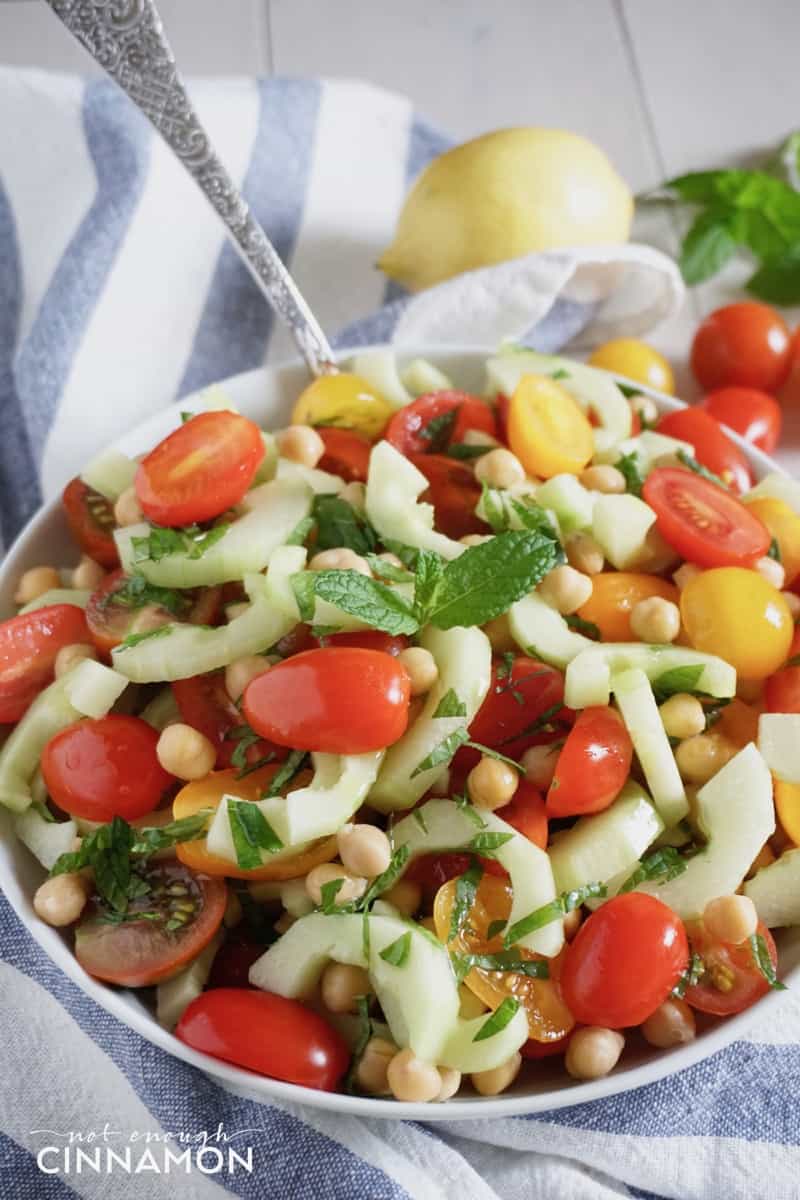 So, as you might imagine, most of the time I pretty much invade the kitchen and poor Solal doesn't really get a chance to use it. But he's actually a good cook!

And his specialty is to come up with something delicious with what's available in the fridge at the moment (you lose the game if you need to go to the store). Or just dream up recipes.

But in any case, he will never ever follow a recipe. It's just not his thing.

Anyhow, when I gracefully gave up a slot in the kitchen (aka when I was just too lazy to cook dinner) he made this incredible, yet simple chickpea salad and it was just a really good dinner.

This simple chickpea salad is 100% vegan, yet loaded with protein!

Super uncomplicated, yet really tasty. In addition to being vegan, this healthy summer salad is also loaded with proteins (he added tuna), so that makes for a happy Solal.

Since then we've made this easy chickpea salad many times and it's a super convenient quick dinner you can whip up in no time at all.

Do try to actually use mint because we thought it really made a difference when there wasn't any. Enjoy! 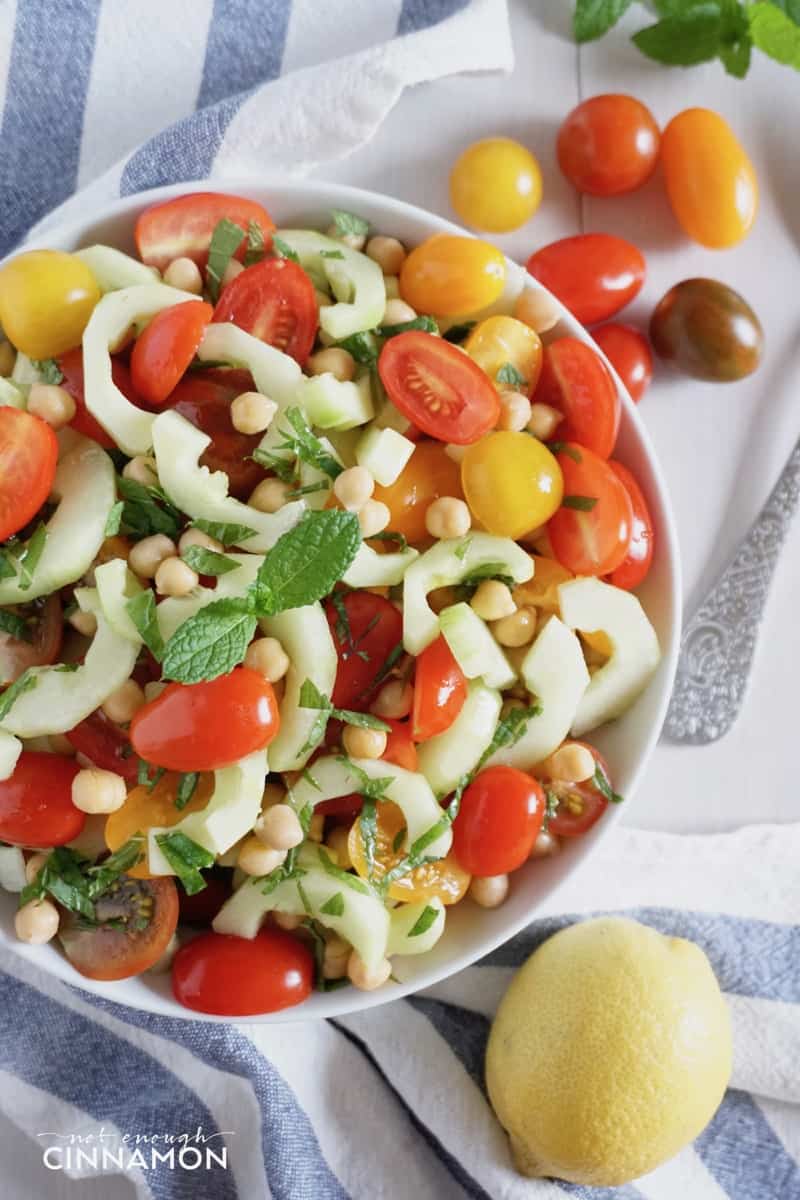 If you tried this simple chickpea salad recipe, don’t forget to rate the recipe below and let me know how it went in the comments – I love hearing from you! You can also follow me on Instagram, Pinterest, and Facebook for more deliciousness and behind-the-scenes!

This simple chickpea salad is vegan, yet loaded with protein! Sliced cucumbers, cherries, and mint along with a simple lemon dressing make this the perfect healthy summer salad to serve on a hot day or at a bbq!

Optional: for even more protein, you can add a can of tuna (but it won't be vegan anymore).