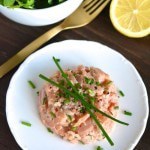 My Salmon tartare recipe is an easy, yet elegant way to serve raw fish. Make sure to use the freshest salmon you can find. Sprinkle with pepper and chopped chives and serve as an appetizer, or along with a salad for a light low carb meal. 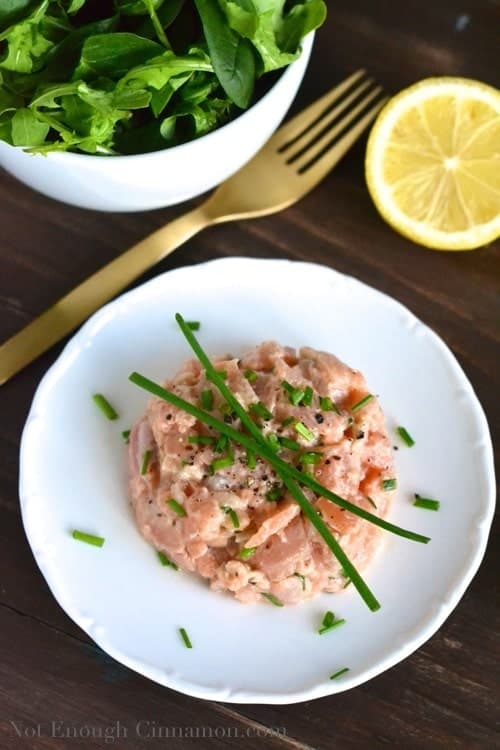 Whenever I think about salmon tartare, it instantly brings my dad to my mind, because he had makes the best salmon tartare of the whole wide world. And I swear I'm not saying that just because he's my dad but really, his tartare was to die for.

When we were younger, he would make his salmon tartare recipe for any special occasion: a birthday, the holidays or...just because! He knew it was the best way to make us happy because my sisters and I were just crazy about it.

About 10 years ago, my dad changed his lifestyle and switched to a healthy diet so he no longer uses the same salmon tartare recipe. Because if I remember well, it called for cream and a little bit of vodka. Ahem.

Thanks to this special salmon tartare experience, I have developed very high tartare standards and I might be a little bit of a tartare snob. Which is a very good thing for you! 😉

The salmon tartare recipe I'm sharing today is very simple and quite healthy. No cream or vodka, promise. To allow for the best texture and flavour, I used a mix of fresh salmon and smoked salmon that I seasoned with Dijon mustard, lemon, chive and shallots.

This salmon tartare recipe makes enough for two people as an appetizer but Solal isn't a big fan so I had two servings and called it a lunch. Sorry, not sorry!

If you love salmon sushi but never tried salmon tartare, there's a high chance you're gonna love it too! I know I do 🙂 And given that it's so easy to make, you don't really have anything to loose, do you? 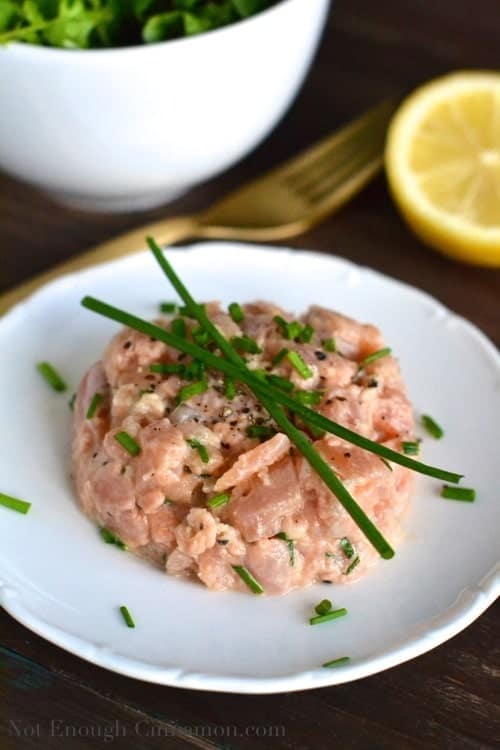 If you tried this salmon tartare recipe, don’t forget to rate the recipe below and let me know how it went in the comments – I love hearing from you! You can also follow me on Instagram, Pinterest and Facebook for more deliciousness and behind-the-scenes!

My Salmon tartare recipe is the easiest, yet also the most elegant way to serve fish. Make sure to use the freshest salmon you can find. Sprinkle with freshly ground pepper and chopped chives and serve as an appetizer, or with a salad on the side for a light low carb meal.

You can also add an avocado, cut into small cubes, and use cilantro instead of chive and lime instead of juice for Mexican flavors.