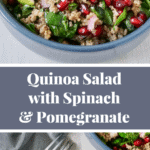 A beautiful vegan quinoa salad inspired by Middle-Eastern and Persian cuisine with pomegranate arils, fresh mint, and pistachios. Eat this healthy and filling salad either as a main or a side dish. 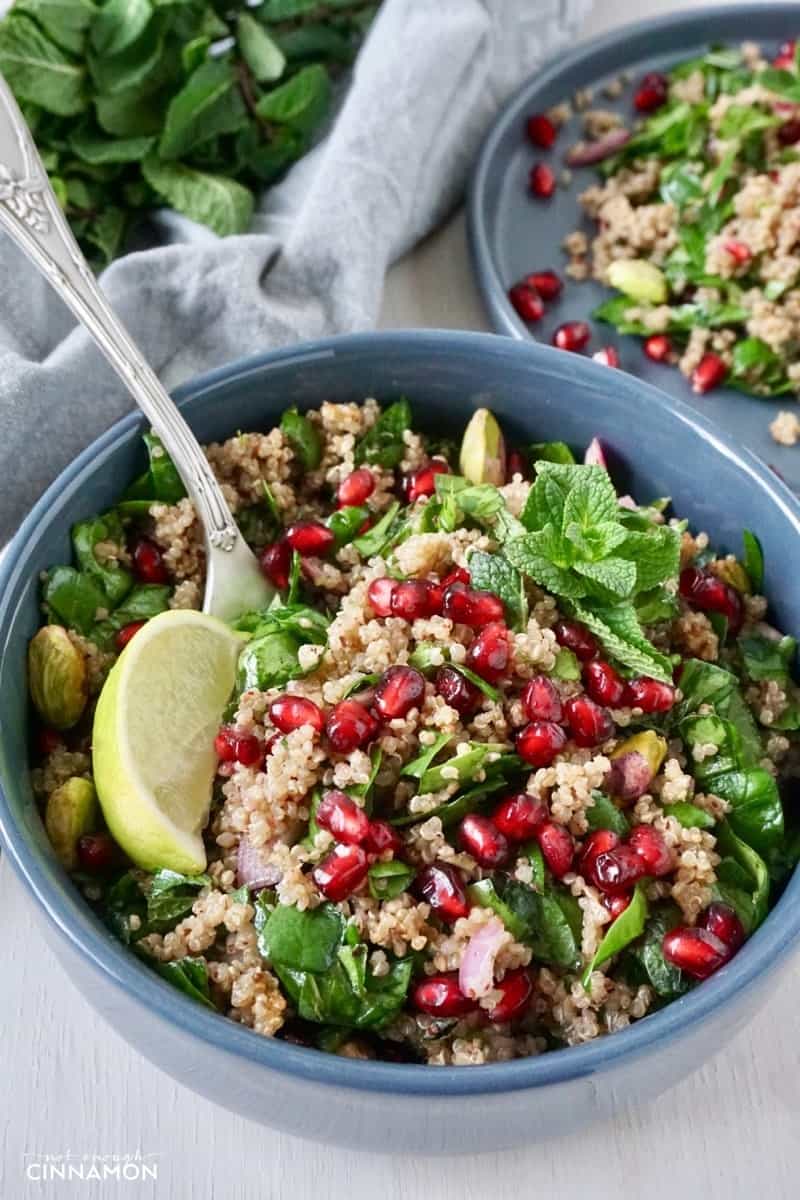 When people tell me they don't like quinoa, first I roll my eyes and then I say "Are you sure you've had quinoa cooked the right way? Come on, I'll make you something and I'm sure you'll love it".

And if they still don't like it, then I'm no longer friends with them. Ok, just kidding. They are allowed not to like quinoa – and by extension, you are too.

In fact, it took Solal aka. my hubby a verrryyy long time to get to like it and it's still not a victory on every single quinoa dishes I make, but I still love him very much. So see, I'm not that judgemental.

This Vegan Quinoa Salad with Spinach, Mint, and Pistachios will convert the uninitiated!

But anyways! One of these dishes I'd make for quinoa-dubious people is this vegan quinoa salad because it's so dang good.

Ok, so if they don't like pomegranate, or mint, or spinach, or pistachios, then there's nothing I can do for them but otherwise => yum yum yum!

I wish I could have tested my theory on Solal but I and my mom finished the whole bowl of vegan quinoa salad for lunch while he was away. Too bad, eh! (but also...I don't regret a thing). 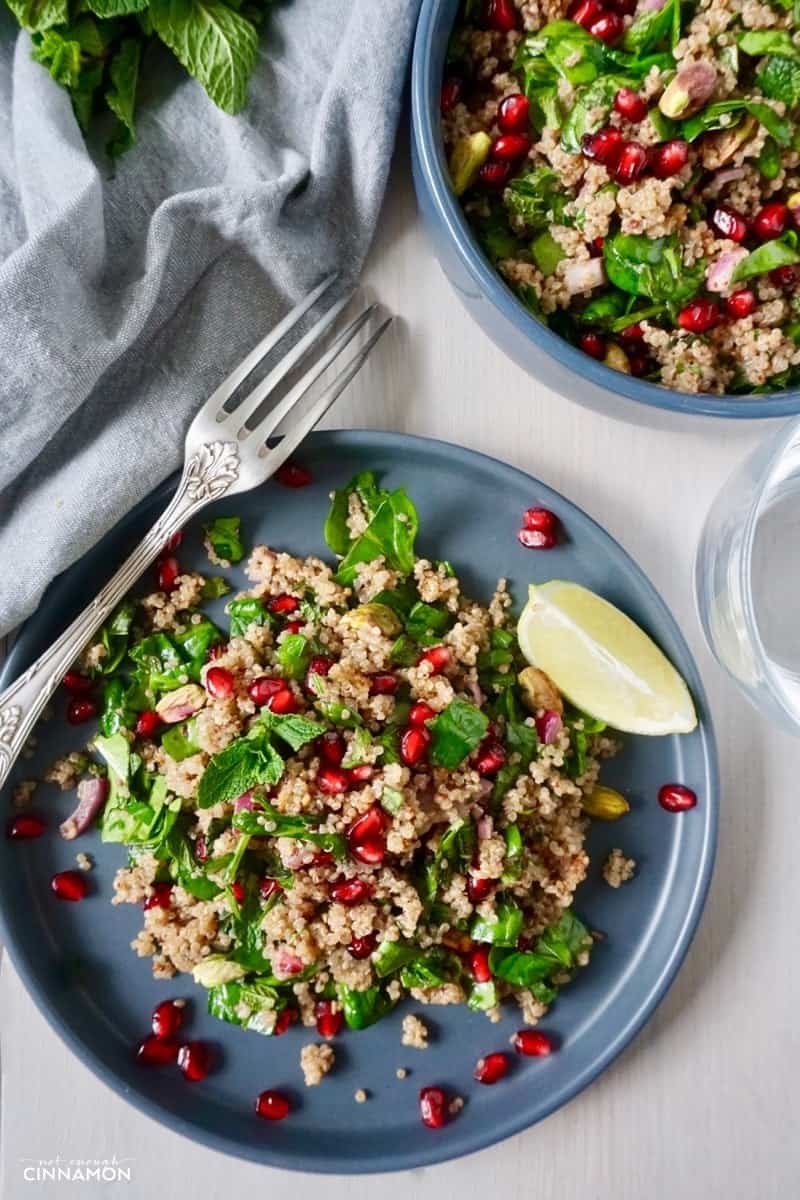 This vegan quinoa salad has its roots in the Middle Eastern and Persian cuisine with beautiful bright red pomegranate arils, fresh mint, pistachios, and sumac.

Have you heard of sumac before? It's a fruity and somewhat tart spice that's widely used in these cuisines with meat, fish, and sauces. It's delicious sprinkled over hummus too!

Sumac is one of those spices you don't need to cook - which makes it perfect for this vegan quinoa salad. Of course, if you don't have any and don't want to buy some, you can leave it out. However, it really adds a nice touch and deepens the flavor.

I ate this healthy Persian quinoa salad as a main, but it would be lovely as a side with a piece of meat - like lamb for instance, or beef kabobs! 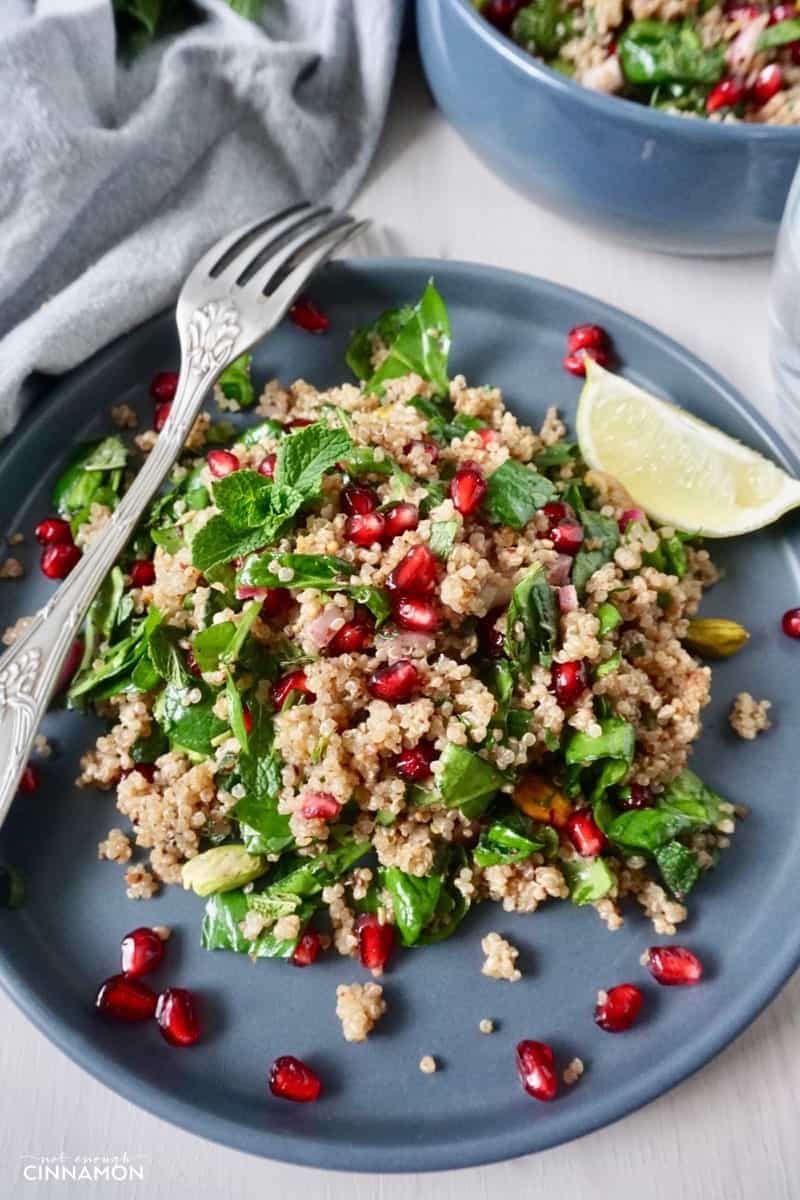 If you tried this vegan quinoa salad, don’t forget to rate the recipe below and let me know how it went in the comments – I love hearing from you! You can also follow me on Instagram, Pinterest, and Facebook for more deliciousness and behind-the-scenes!

A beautiful quinoa salad inspired by Middle-Eastern and Persian cuisine with pomegranate arils, fresh mint and pistachios. You can eat it either as a main or a side dish. It's fresh, healthy and filling.