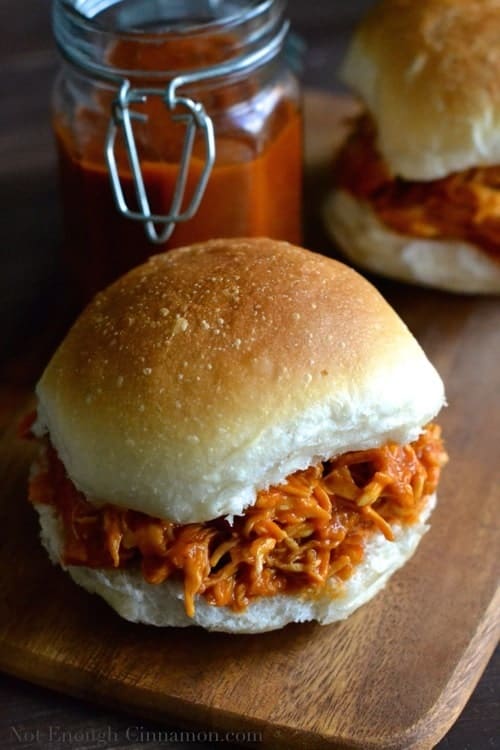 This Peach BBQ Pulled Chicken is a healthy spin on a Southern Classic. Fork-tender chicken in a homemade sweet peach barbecue sauce. Serve it on a burger bun for a casual dinner, or with some salad and veg for a light summer meal.

After making yet another batch of this healthy Peach BBQ Pulled Chicken for dinner tonight, I can confirm two things:

It's pretty scrumptious and it's definitely a really easy meal to prepare. Don't be fooled by the one hour+ total time because, during most of this time, you actually don't have anything to do other than enjoying the smell of your homemade peach bbq sauce.

To make the peach bbq sauce, simply combine all the ingredients in a pot and simmer for one hour – the only prep being peeling and chopping two garlic cloves. You've done more difficult than that, I'm sure!

While the peach bbq sauce is cooking, prepare the pulled chicken. Again very easy! This is not a crock pot or slow cooker pulled chicken recipe. We use basic utensils - a pot. Put the chicken in, cover it with water and cook for about 30 minutes. Once the chicken is cooked, you'll just have to shred it, using two forks.

When the peach bbq sauce is done, you combine the two and tada your BBQ Pulled Chicken is ready! You can serve the juicy shredded chicken with buns, as shown in the first picture or simply "naked" with a side of veggies or a salad. Both ways are delicious. 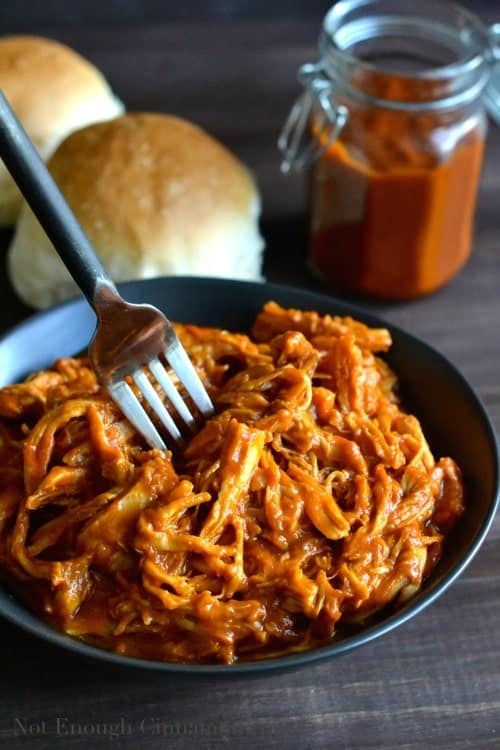 One of the reasons, why this BBQ Pulled Chicken recipe is healthy, is because we toss it with a homemade bbq sauce instead of store-bought sauces.

However, most of the BBQ sauce recipes you'll come across also contain a lot of refined sugar but not this peach bbq sauce! Thanks to the sweet canned peaches, there's no need to add any, as they act as a natural sweetener.

When buying your canned peaches, make sure you choose the ones in juice and not the ones in syrup because fruits in syrup always have added sugar in. You could probably use fresh peaches if they are in season where you live but I haven't tried.

If you decide to give it a go, my guess is that you should peel them first and add about one cup of water to replace the juice. Anyways, I hope you'll try this healthy recipe for Peach BBQ Pulled Chicken soon. 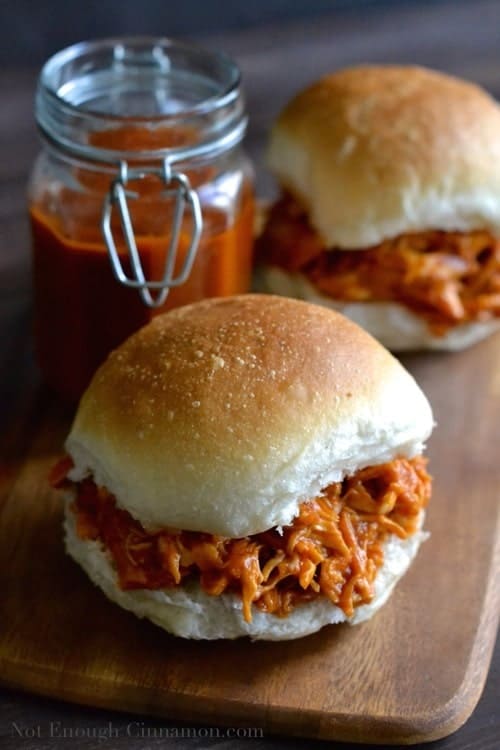 If you tried this Healthy Peach BBQ Pulled Chicken, don’t forget to rate the recipe below and let me know how it went in the comments – I love hearing from you! You can also follow me on Instagram, Pinterest and Facebook for more deliciousness and behind-the-scenes!

This Peach BBQ Pulled Chicken is a healthy spin on a Southern Classic. Fork-tender chicken in a homemade sweet and spicy peach barbecue sauce. Serve your healthy pulled chicken on a burger bun for a casual dinner, or with some salad and veg for a light summer meal.

For the peach BBQ sauce