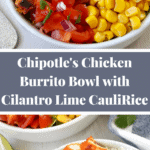 This Chipotle's chicken burrito bowl made with marinated chicken, sweet corn and beans is my own homemade version of a favorite – made healthier by using cauliflower rice instead of normal rice.

Have I told you the story of this summer of 2011 I spent in Philadelphia and discovered Chipotle Mexican Grill?! My life was forever changed.

And I'm only exaggerating a little. At the time, I was still living in France (because hey! I'm French! did you know?) and Mexican food wasn't and still isn't super common there.

It's not rare either but it's nowhere near as popular as it is in the US.

Anyways! I was living on the Penn Campus, right next to a Chipotle's restaurant and discovered the beauty of chicken burrito bowls. It was love at first bite.

After that, I couldn't tell you how many times I ate there during my stay – I just couldn't get enough.

I 100% credit Chipotle for making me discover Mexican food (or the American version of it at least!) and I'm grateful they did because holly molly, that stuff is delicious!

Now, Chipotle has arrived in Paris...but I no longer live there – and I've learned how to make delicious Mexican and Tex-Mex recipes like this chicken burrito bowl in my own kitchen anyway!

This chicken burrito bowl is my own homemade version of a Mexican restaurant favorite. The whole bowl is a nutritional powerhouse, packing 34 grams of proteins and 8 grams of fiber for only 372 calories per serving.

Thanks to the beans and the chicken, you'll stay full for long, without feeling heavy like after a big meal. Swapping the rice for cauliflower rice not only lowers the carbs,  but it also adds bonus veggies without compromising on the flavor.

This chicken burrito bowl recipe is pretty forgiving. You can pick and choose your favorite toppings (just like you would at Chipotle's ????), use different kinds of beans, adjust the spices for the meat marinade.

No one will judge you if you decide to eat your burrito bowl with "normal" rice instead of cauliflower rice! Enjoy! 🙂 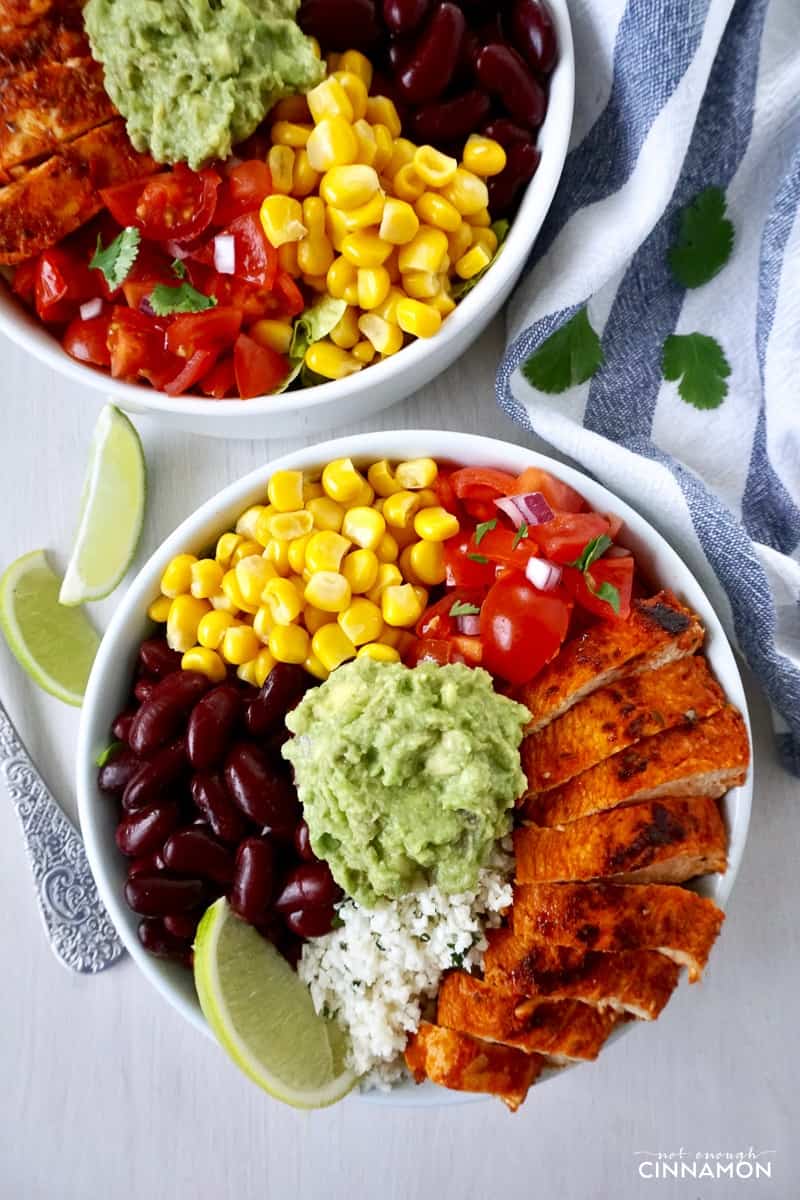 If you tried this Chipotle's chicken burrito bowl, don’t forget to rate the recipe below and let me know how it went in the comments – I love hearing from you! You can also follow me on Instagram, Pinterest, and Facebook for more deliciousness and behind-the-scenes!

This Chipotle's chicken burrito bowl made with marinated chicken, sweet corn and beans is my own homemade version of a favorite – made even healthier by using cauliflower rice instead of normal rice.  Add your favorite toppings like guacamole, salsa or shredded cheese and you're set for an extra delicious meal! Naturally gluten-free.